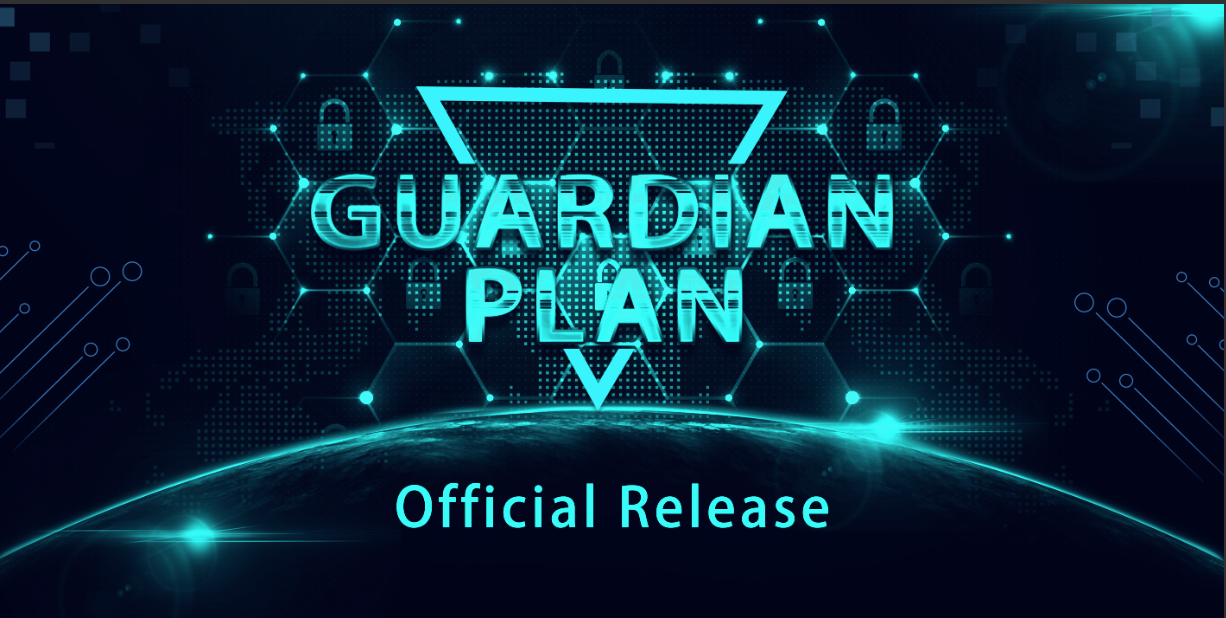 QuarkChain Mainnet Singularity V1.0 will be officially launched on April 30, 2019. QuarkChain will be one of the first public chains which successfully implements high-throughput sharding in the world. In addition, QuarkChain so far is the only public chain supporting various consensus algorithms, multiple virtual machines, and multi-native tokens. Although Singularity is tiny, its destiny is to be the first starting point for the future brilliant blockchain universe!

QuarkChain will begin to gather momentum after its mainnet launch on April 30, 2019. A flexible, high-efficiency, and popular QuarkChain ecosystem universe is expected to blossom earlier with the support and co-construction from the community, which is the key factor to the success of a blockchain project.

To better promote community development, QuarkChain is announcing the launch of Guardian Plan. We would like to select more community members that are trustable, committed, and beneficial to the QuarkChain ecosystem universe expansion and the mainnet protection to enhance the security of the network where the hash power is limited at the early stage.

Guardian Plan has attracted extensive attentions in global community since the plan was announced. We will provide an overview of Guardian Plan in this blog post, focusing on applications, rules, voting, and rewards.

1.What is QuarkChain Guardian Plan?

Guardian Plan will be launched to protect all community members’ interest and guarantee the security of Mainnet with enough hash power. Mining rewards will be distributed to all participants in response to the enthusiasm for creating a flexible, high-efficiency, and popular QuarkChain ecosystem.

Firstly, QuarkChain Mainnet 1.0 supports sharding blockchains and a root blockchain that confirms all blocks from the sharded blockchains in order to achieve the decentralization while maintaining efficiency and security. Proof of Staked Work (PoSW), a sort of consensus mechanism exclusively developed by QuarkChain CEO Dr. Qi Zhou, will also be applied in mainnet.

Briefly speaking, PoSW combines the main features of PoW and PoS, incentivizing miners tostake. The higher percent of all hash power of the network, the more QKC will be needed to stake. A simplified version of PoSW will be deployed on the root chain, i.e. the Guardian Plan, to provide the sufficient protection for the mainnet.

Guardian Plan is designed only for the root chain. Mining difficulty on each shard is completely determined by PoSW. Mining rewards obtained from guardian nodes will all be used for QuarkChain ecosystem, community construction, and rewards for guardians.

In order to ensure that community construction funds can truly return to the supporters of the QuarkChain project, we decide that a token holder must stake QKC to become a candidate. Rewards allocation will be determined by voting within the community.

According to the different numbers of QKC staked, we promote two kinds of guardian roles:

During the Guardian Plan implementation period, all the participants will be provided with the basic rewards based on their involvement. In addition, those who contribute to maintaining the security of QuarkChain Mainnet will be rewarded additionally.

Reward One: Community members who vote for Elf Guardians will get 10% annualized returns for their contribution in QuarkChain ecosystem. The detailed calculation will be given as follows.

Reward Two: Each year, 40 million QKCs will be rewarded to eligible Elf Guardians and community members voting for Elf Guardians. The detailed calculation will be given in the following.

Additionally, to show the good faith of QuarkChain team on the long term vision and mission of this project, QuarkChain foundation will match and stake the same amount of QKC during the Guardian Plan.

How to become an Aegis Guardian?

How to become an Elf Guardian?

In order to become an Elf Guardian, a candidate must:

Participating in our Elf Guardian campaign and successfully winning the election, the Elf Guardian will earn the rewards according to the ranking by the community votes. The calculation method of the reward for every Elf Guardian is given by the following way:

To motivate the participation enthusiasm of Term I, the rewards of the Elf Guardians for Term I will be doubled!

The rewards this Elf Guardian is expected to earn within one term are:

According to our reward principle, the rewards this Elf Guardian earn at the Term I will be doubled, so the actual rewards will be reach to 1.07 million for the first term! If all the conditions remain the same anthis Elf Guardian is re-elected for one year, the estimated total rewards are expected to reach to 3.73 million QKC!

3. How to participate in the Guardian Plan?

We will set up an event page for the Guardian Plan at the official website and announce all the qualified guardian candidates in the current term.

4. How to vote for Elf Guardians?

Way to get votes

Staking QKC for receiving the votes will open from March 20. All QKC holders are able to obtain the votes by the following ways:

The basic formula for staking QKC for votes is:

Those that show long-term commitment by staking for a longer duration will be rewarded with extra “bonus votes” .

Community members will be rewarded with bonus votes based on the staking duration.

The formula for acutal votes is given as follows: 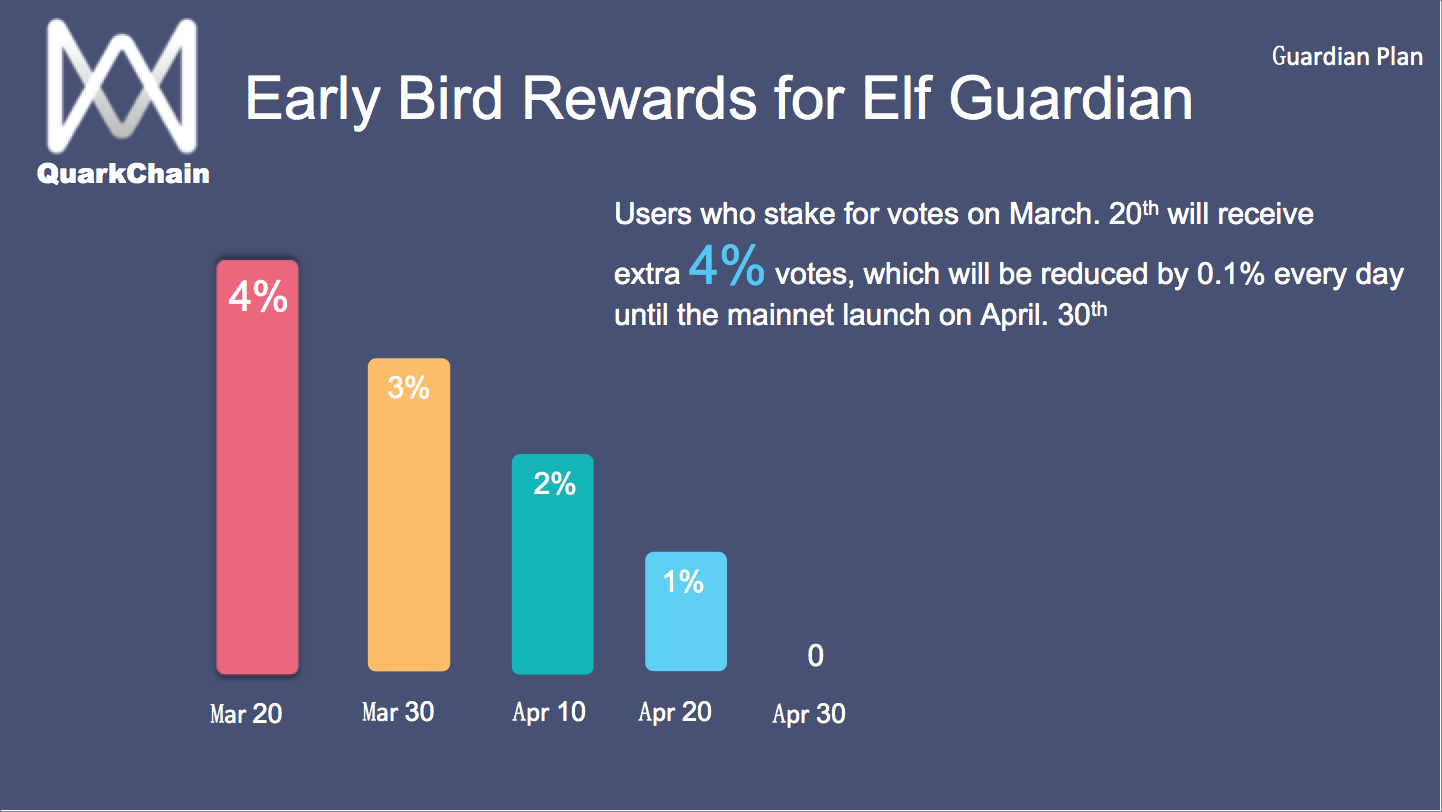 We encourage all community members to participate in this voting process for Elf Guardians, which are the most beneficial to QuarkChain’s ecosystem development. QKC rewards which will be distributed to voters of Elf Guardians include:

Example: Suppose that a community member staked 5,000 QKC for voting and staked a duration of six months on the second day of the staking opening, i.e., Mar. 21. Then the total votes he/she will receive are given as follows:

The basic rewards a voter will receive are given as follows:

The rebate rewards a voter will receive are given as follows:

Therefore, the total rewards a voter who staked 5,000 QKC for six months is expected to earn are given as follows:

In total, this community member participating in staking and voting will earn as much as 66% returns on the QKC rewards for staking 6 months!

The withdraw time is related to the staking time and duration. Rewards will be distributed to Elf Guardians and voters after the end of this Elf Guardian’s term (every two months).

Notice: All the formulas for rewards and examples that mentioned above are only for demonstration purposes. The actual revenue will display on the website. QuarkChain reserves the rights to adjust the rewards and proportion according to the participation of the event.

–Guardian Plan application is officially launched NOW! Anyone who is interested in joining the plan is required to complete the form (https://goo.gl/forms/UcV9vgee6LnZ4hbG2 ). QuarkChain team will respond to the application within 3 business days.

–Staking QKC for votes starts on March 20, 2019. Early bird rewards will begin to calculate on the same day.

–The voting process (Term I) will open on early April, 2019. Staking QKC for votes will be continuing at the same time. The exact starting date for voting will be announced officially later.

–Term I Aegis Guardians application will end on April 25, 2019. Applicants who miss the deadline will be considered as the candidates for Term II.

–Phase I Elf Guardians application will end on April 29, 2019. Applicants who miss the deadline will be considered as the candidates for Term II.

–The voting process will finish on April 30, 2019 when the mainnet launch. Elected guardians will be announced within one week by QuarkChain team, or one can check all the details by visiting the official website.

After the mainnet launch, Elf Guardians will be re-elected every two months. Votes will be cleared when a new term starts, and voters need to re-vote accordingly. This process will last until the hash power of QuarkChain mainnet runs stably. 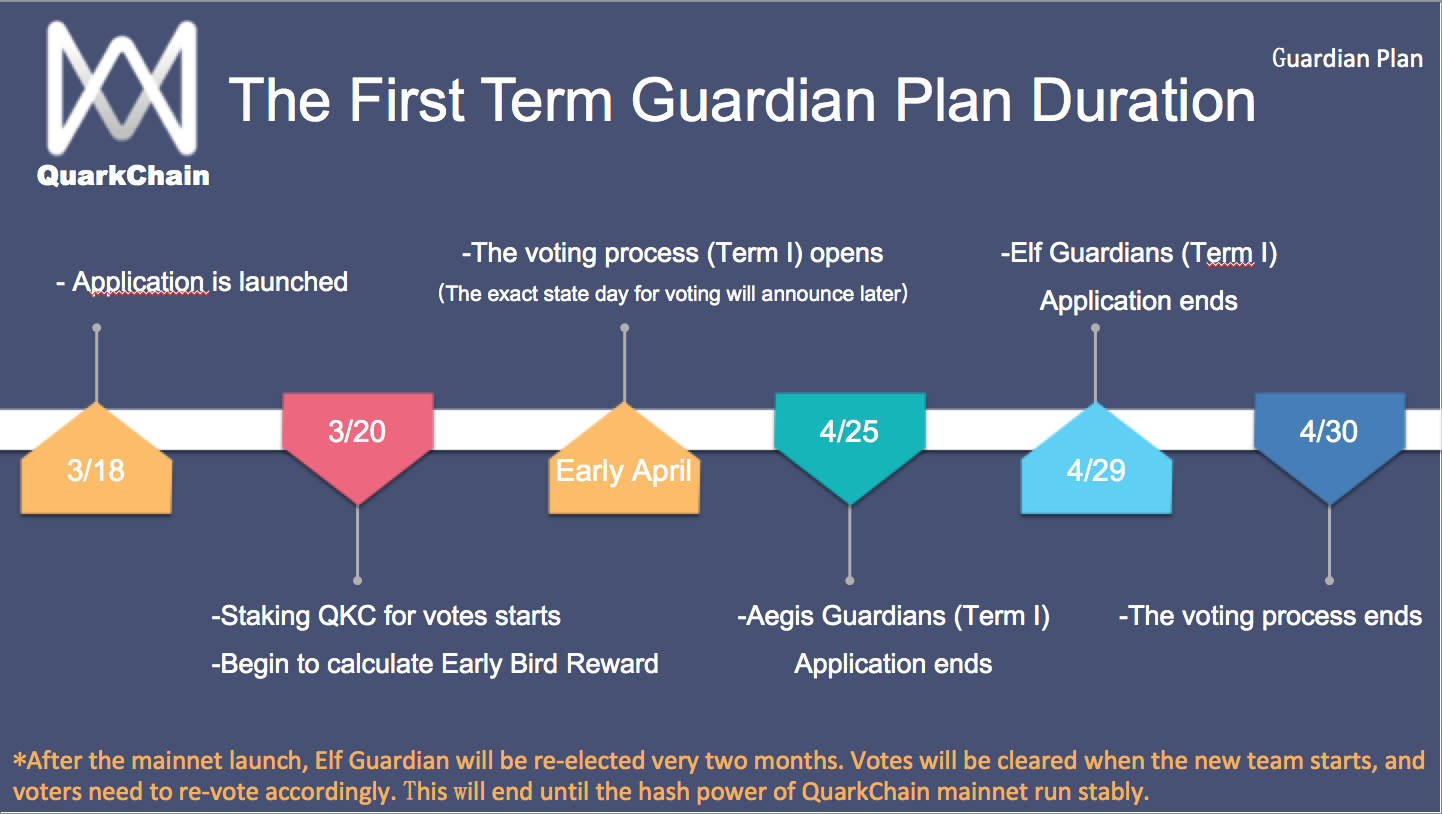 If you have any other questions, please contact: support@quarkchain.org

QuarkChain Foundation LTD reserves the final rights of explanation regarding all rules and regulations of this event.